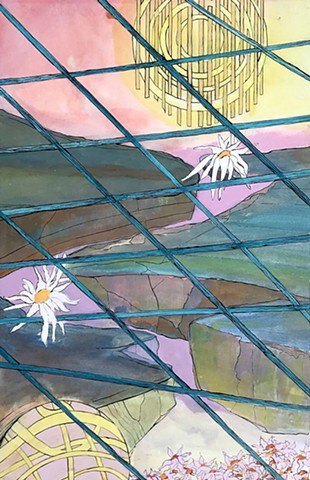 Carol Marie Vossler was born and raised in Rochester, NY. She arrived in the Adirondacks in 1979 where she attended and earned her AAS degree in Forestry from Paul Smith’s College. She later earned her BFA from Plattsburgh State University and her MFA in Sculpture from Syracuse University. She taught in higher education for seventeen years, first as an adjunct instructor at SUNY Plattsburgh and then as a full-time instructor at North Country Community College. In 2018, Carol Marie became a certified “Art Integration Specialist” enabling her to create STEAM & Project Based Learning programs for teachers, students and community-based organizations. Carol Marie is the Founder and Director Emeritus for BluSeed Studios. She has introduced artists from around the world to the North Country and curated several national and international exhibitions at BluSeed Studios. In June of 2019, after twenty years of successfully managing the studio, she stepped aside from the non-profit world so she could pursue her own creative endeavors under the banner of Lunar Horizons. To learn more about Carol Marie Vossler visit “Lunar Horizons” at Lunar Horizons

About her untitled work, Carol writes: The imagery in this work symbolizes the science and data proving that all living organisms on earth are interdependent on each other. The transformational journey from birth to death is a natural phenomenon. The tragedy being the formulation of misinformation by social, political and religious factors, depriving the majority of humans and animals their right to live and die with dignity.