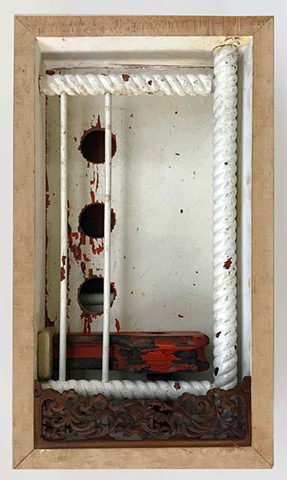 Norman Taber lives in West Chazy, New York and teaches design at SUNY Plattsburgh. His fine-artwork are often assemblages, which usually take the form of “boxes” which he has been creating since the early 1990’s. Norman is influenced by the work of Joseph Cornell and Louise Nevelson and finds inspiration from box lots at rural auctions and the white-washed walls of the dairy barn on the farm where he grew up. He loves asymmetrical balance, empty space, and the patina of well used objects.

About Empty Pedestal Norman writes: I lost my sister Chris in the year 2000. She was the most dedicated and talented artist I have known. My sister shared a formative part of my life, and when she was lost a reminder of many memories was also lost. A few years after her death a friend of hers returned some paintings my sister had left stored in his barn. At the time of the creation of these painting my sister had been experimenting with encaustic, and the bee’s wax had melted and stuck to objects around it, rendering one of the paintings a distorted version of its original self. For years I have watched as it further degraded, it was too deteriorated to save, and I was too guilty to let it go. In this assemblage I have incorporated a small section of the canvas – visible through the holes (a common theme in my boxes) - in this way I feel I have salvaged a small section of her work, and it has once again provided me with the opportunity to be inspired by and collaborate with her some twenty years on.