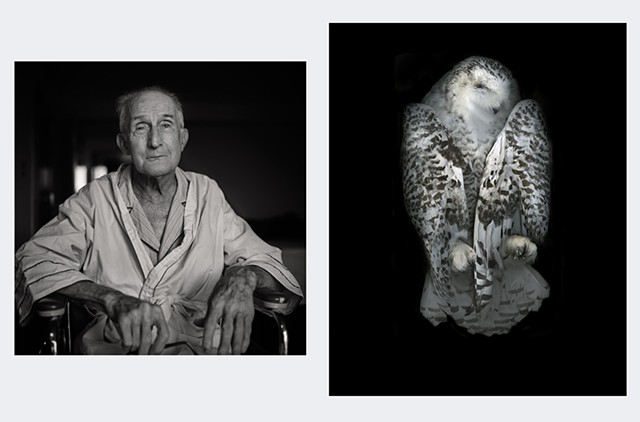 Sue Lezon has worked as a photographer on archaeological expeditions in the Middle East for over forty years, primarily in Egypt. Living for extended periods of time in profoundly foreign environments while photographing the remains of ancient civilizations has strongly influenced her work. She considers her images contain iconographic clues to the inner life of both ancient and contemporary cultures. Sue also teaches analog and digital photography at SUNY Plattsburgh. She believes in honoring the tradition of B & W silver-based photo-graphy, and incorporates digital images into her work as well. Her photographs are a part of private and public collections worldwide. Sue received her BFA from Emerson College and her MFA from the University of Massachusetts, Amherst. Sue Lezon

About My Father at 78 Sue writes: My father, Stanley Lezon, died in 1991 at the age of 78. He was a gentle man with a loving heart. I traveled a lot for work at that time, so I wasn’t able to spend as much time with him as I would have liked. But we spoke on the phone often, and wrote newsy letters to one another. A few months before he died, I had an opportunity to spend several days with him. We hung out together, as we always had, talking randomly about books and baseball and the dogs we loved. At the end of my visit, I asked him if I could take his picture. He gave me the most glorious smile. It was an extraordinary gift. I treasure that moment and this photograph more than I can say.

About The Start of our Romance Sue writes: A (very handsome) acquaintance of mine stopped by my office on a cold February day in 2008 to tell me that he had found a Snowy Owl frozen by the side of the road. He was fairly sure she had been hit by a car. Saddened by her death, and deeply moved by her elegance, I found myself wanting to share her beauty, and honor her life in some way. The photograph is the result. And my “acquaintance?” That beautiful owl started a romance that is still going strong.