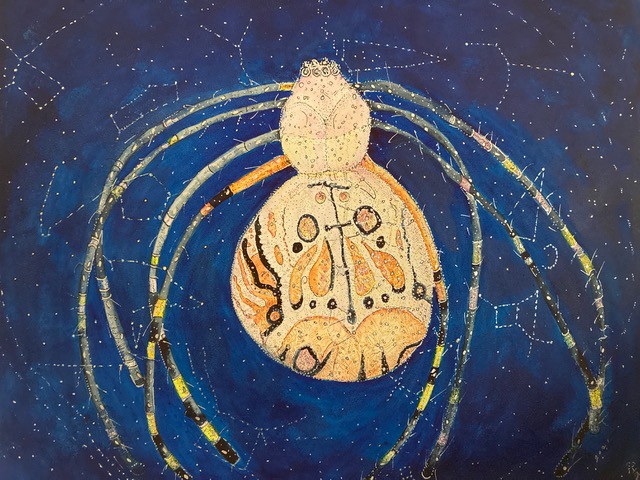 Homage to Death, watercolor and chrome paint with acrylic on the sides, 16 x 20 inches, 2021

Mary Risala Laird, MFA printmaking, University of Wisconsin, Madison, has been printing letterpress books since 1969 as Quelquefois Press. She partnered in Perishable Press Limited editions from 1969-84. Ms. Laird has taught letterpress at San Francisco State University, Kala Institute in Berkeley, Naropa University, and at the San Francisco Center for the Book as well as workshops in Utah, Idaho, Colorado and Washington state. She also served on the board at the San Francisco Center for the Book for six years. Each year for fifteen years she worked with, an entire 7th grade class as a guest artist, making handmade journals. Her focus in printing is poetry. She binds the editions she prints. Her work is in many collections across the country, including Stanford University, UC Berkeley, Library of Congress, UW Madison, the British Library, Yale University, University of Washington, and UC Santa Cruz. She has three grown children, 15 grandchildren, and lives in Berkeley with her husband, John Wali Malork. She is also a senior teacher in the Inayatiyya, and focuses on retreats.

About Homage to Death Mary wrote: In honor of all living beings, who accepted the birth, life, death cycle, the circle. For that ever-expanding circle of hearts who hold up the light of truth, light and love, each according to their own discernment. With joy, reverence and humility.

Thank you, Diane, for loving your sister, Beth To Kathy, for loving Richard To Tara Bryan, Kim Spalatin, Astara Mathews

This began as embroidery on Tara’s T shirt, a shirt of her painting of Icebergs. I began by sewing names in silver and gold. At the same time, I had started a watercolor of a sculpture of a three- foot cloth and wire-stuffed Japanese spider created by Susan Snyder when she was in her twenties living in Japan. The body of the spider was sewn from old kimonos. When I finished the spider, Susan said “It looks dead.” The legs were all lined up, not spread out as on a web, for it was standing on a table in front of me. Dead! I was thrilled. I knew that this was the piece I would put in the show. In the middle of the night it came to me to veil the constellations over the spider and around the edges. She was the Orb Spinner of the Universe, the Mother Spider, Kali, Eight-armed Buddha, Weaver of all Connections and Consciousness.